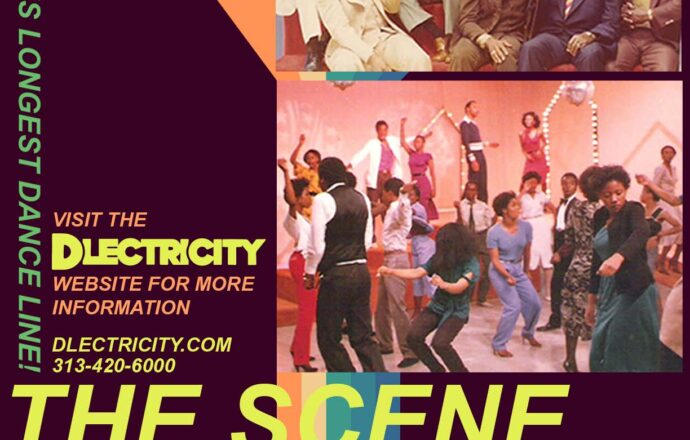 DETROIT (September 20, 2021) – DLECTRICITY and “The Scene” with Nat Morris and Friends will create Detroit’s longest dance line during DLECTRICITY, the nighttime festival of art and light on September 24 & 25, 7 p.m. to Midnight in Midtown Detroit’s Cultural Center, Beacon Park and Circle Park. As one of the more than 40 artists and art installations, “The Scene” will bring dance and music to these Illuminating nights and Detroiters back to the 80s with Detroit’s famous TV show on a large open-air 80’ x 80’ dance floor at DTE’s Circle Park. The public is invited to join in Detroit’s longest dance line and can register here.

DLECTRICITY features over 40 artists from Detroit and across the globe who have been commissioned to create stunning art, light and technology installations. Produced by MDI and presented by DTE Energy Foundation, the nighttime outdoor festival of art and light will take place in open, public spaces.

DLECTRICITY is free to the public and will awe attendees with cutting-edge installations of light, video, performance, and other unexpected works of art.

DLECTRICITY is partnering with Nat Morris, executive producer and host of Detroit’s historic daily dance show, “The Scene,” that aired on WGPR TV 62 from October 13, 1975 to December 31, 1987, to create a special dance and music installation for this year’s festival called “The Scene with Nat Morris and Friends.” Morris’ headshot is available here.

The Scene will take over DTE’s Circle Park for the event and each hour will feature different hustles and DJs, including Ron OJ, Tony Peoples, Hump the Grinder, DJ Mr. Entertainment, Gary Chandler, and other special guests.

In partnership with WDET, The Scene’s installation will feature a large open-air 80’ x 80’ dance floor along with DJs, dancers, and other local talent. These festivities will be streamed online on the DLECTRICITY Facebook page, as well as on a Livestream wall that will be present on Kirby Street in the Cultural Center footprint. WDET’s Chris Campbell, host of the “Progressive Underground” will also help emcee this tribute to The Scene.

At DLECTRICITY, dancers will dance to some of the same music that was played on The Scene during the time period that it aired. Dancers from the three eras, early years, middle years and the final years will also be recognized and Morris says he will spotlight a few very popular dancers such as Yvonne Gooden, Cheryl Peoples, LaWanda, Fast Freddy Anderson, Moses Hepburn and Lorenzo Colston, to name a few. Staff who worked on the The Scene during its 12-year run and other WRPG-TV 62 crew who made the show possible will also be recognized at DLECTRICITY.

“We are proud to include The Scene in this year’s festival as it embodies the creativity, diversity and spirit of what DLECTRICITY is about. The Scene shaped culture during its tenure and inspired dance and music trends across the world. It is a beloved Detroit institution that continues to be rediscovered by younger generations,” stated Annmarie Borucki, Director of Art and Culture for Midtown Detroit, Inc.

“I am thrilled beyond measure about ‘The Scene with Nat Morris and Friends’ installation,” said Nat Morris. “Being included in an event some 34 years after The Scene went off the air is just mind blowing. It’s an honor like no other. This installation gives everyone in the area an opportunity to be ON THE SCENE, and to come together for a big Detroit dance party free of charge.”

Sounds will be provided by DJ Ron OJ and Tony Peoples from 7pm to 8pm, Hump the Grinder from 8pm to 9 pm for what Morris hopes to be a history making dance line and Dion Norman from 9pm to 10pm, with the famous Gary Chandler for 10pm to 12 midnight to close out each evening. Special guest appearances by RJ Watkins and Henry Tyler (New Dance Show), and many more are scheduled.

The Scene had many firsts but being among the first Detroit’s media outlet to air Rap and Techno music to a mass audience gave the show it’s cutting edge. During the shows 12 years on the air, many of The Scene dancers became local celebrities and went on to dance on nationally syndicated shows such as American Bandstand and Soul Train. Several other Scene dancers went on to win national dance competitions on “Solid Gold” and “Dance Fever.”

The Scene is undeniably a part of Detroit’s television history and dance culture. The Scene and Nat Morris are immortalized in several books that document the history of local Detroit television including; From Soupy to Nuts by Tim Kiska, 2005 – Momentum Books and TV Land- Detroit by Gordon Castelnero, 2006 – University of Michigan Press. The Scene has had a place at The National Museum of African American History and Culture (Smithsonian) in Washington D.C. since it opened to the public in 2016.

The show is also featured in two Museums in Detroit—in The William V Banks Broadcast Museum and Media Arts Center which is house in the exact studio where the show originated from on East Jefferson. There is also a State of Michigan Historical Marker on the building at 3146 E Jefferson that mentions The Scene. The building was listed in 2021 on The National Registry of Historic Places.

Being part of DLECTRICITY will be only the third time all of “The Scene” dancers and crew have been called to come back together.